In Victorian times, the Bosuns Locker was the centre of business for the Mathews family, who as merchants, sail-makers and ship owners, filled all three floors with barrels of Baltic tallow and tar, yards of Quebec timber, coal from Wales, and chandlery goods. Most of these cargoes were landed from their own ships, whose portraits now hang in the alcoves of the restaurant. The Mathews family were vice-consuls for such far away states as Prussia, Holland and Naples. Beneath the timbers of the old Restaurant Room bargains were transacted by the masters of Neapolitan Brigs out of Rio, or homeward bound East Indian men, while the rich aroma of Geneva, Schnapps and Turkey Twist curled amongst the great beams and rafters of the Bosuns Locker. Many of these timbers were in true Cornish traditions salvaged from wrecks, and in 1867 Mathews themselves bought the masts of the Liverpool Clipper ‘Oriental’, which was lying wrecked at Lamorna. Her big spars and yards replaced ancient timbers, and over a century later, are mellow and handsome features among the decor of the Bosuns and Boatshed Restaurant. 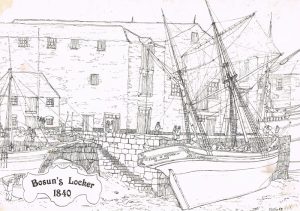 Artists impression of The Bosuns Locker and Penzance Dock in 1840

The illustration above depicts the Bosuns Locker very much as it was over 170 years ago as a wharf side store. Penzance was then a thriving trading post for merchant sailing vessels plying to and fro from all parts of the world. This area of the harbour is one of the oldest parts of Penzance, having served as a harbour in Medieval times.

The Bosuns Locker building dates back to circa 1720. Shown in the picture is the ‘Earl of Devon’ berthed against the Bosuns Locker. At that time, Wharf Road did not exist and ships were able to berth up alongside this building. Also shown is the old steps leading down to the Dock Basin. The top flight of these steps are still visible and in use today, leading up towards the side of the building.

In the entrance to the Boatshed restaurant today is a mural depicting Penzance harbour and Mount’s Bay as it was over a century ago. The mural was painted by the well known local artist and historian Clive Carter, whose ancestor, Harry Carted, ransacked the building when it was used as a Customs Store circa 1780. For many years and up to quite recent time, the Bosuns Locker has been used as a Sail Loft. The old gantry used for lifting cargo is still in place, and is now a feature of our top floor holiday apartment, the Sail Loft, with the old cargo doors becoming a Juliet balcony with fantastic views over the bay.

Welcome to The Boatshed!

We are open for evening service with our full menu every night from 6.30pm, with the exception of Christmas Day, Boxing Day, New Years Day and Sunday 2nd January 2022.

We will also be open for refreshments and light lunches 12-3pm on the following days, 20th-23rd December and 28th-31st December.

Due to the continued rise in COVID cases, and for the continued safety of all our staff and customers, we would like to encourage everyone to continue wearing a face covering, if you are able to, when visiting us. We ask that face coverings are worn at all times, and can be removed when you are seated at your table.

We have made sure we are covid-secure, please visit our booking page to read our safety information and make a reservation.